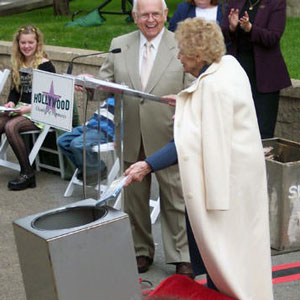 Washington Mutual hosted a Hollywood Time Capsule event in January 2004. About 100 persons and celebrities attended. You'll never guess the secret that was buried beneath the bank company's concrete pathway!

The new capsule you see in these photos is our larger 16" x 16" bolted time capsule. It holds many new items donated by the community as well as the Hollywood studios. Future Packaging & Preservation helped with the preservation of items in the time capsule, too, and they used a large preservation kit for the job. 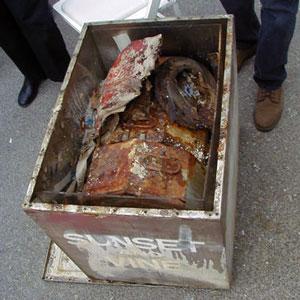 This photo shows some of the ruined time capsule. See that rusted tin movie reel? It held Gone With The Wind. Such a sad disappointment. Other collectible documents, photos, and memorabilia from the dedication were also ruined. They put a lot of thought and effort to include important items from that day, and Hollywood Films in general. But they did not think that the container would leak. The container probably looked quite nice on the day that they buried it. But all the water over the years went right into the container and all of the items were subject to it. To say the community was disappointed would be an understatement. 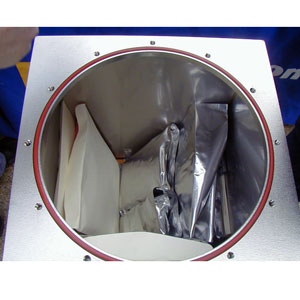 Hollywood's old time capsule from the 1940's leaked. Made of plain mild steel, it rusted, and the seal deteriorated. It contained ruined memorabilia including a Gone With the Wind movie reel.
The new FPP time capsule is our Bolted 16x16" with its special blind hole design, thick stainless flange, machined O ring groove and silicone O ring.
This photo shows some of the items that were preserved inside of the time capsule that day in 2004. 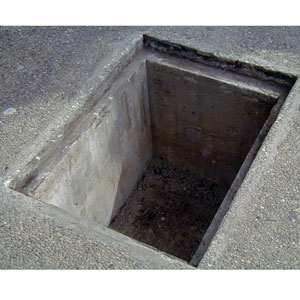 The photos here show step by step how a plaque is placed in the ground.

The time capsule was placed on its side in the hole. If at all possible, please place your time capsule so that its opening and lid are on the top - not the side.

The vaulted area holds a shoulder that makes it easy to place a piece of wood over it firmly. You do not want to pour cement directly onto the time capsule!

Next, the cement is poured and set up. It's a good idea to pour the cement freshly like this because it helps seal the area above the time capsule properly.

In the meantime the bronze plaque is made ready with anchoring hardware from behind.

Workers set it right into the cement as it set up.

In this way, the area above such a time capsule is sealed nicely. 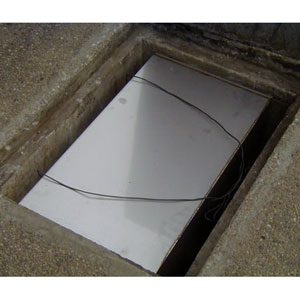 While this shows a proper plaque placement, the time capsule should really be placed further down and away from the sidewalk than shown here.

The reason is one of insulation. You need to have the time capsule and its contents well insulated and as far away as possible from changes in temperaturer. See our blog entry on insulation. 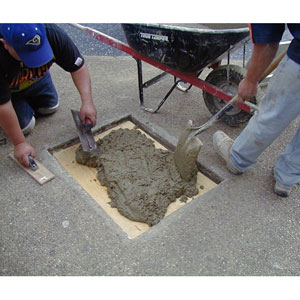 The plywood sheeting was cut and placed on the shoulder of the vault. Then, the workers poured cement over it and smoothed it.

They prepared the area for the plaque placement.

They protected the plaque with tape and screwed in the hardware from behind to help anchor the plaque.

They smoothed the cement and eased the plaque down in.

They chose a bronze plaque to show the dedication and story behind the re-dedicated time capsule and event.

The final plaque placement shows it being centered and squared off.

The plaque's text reads as follows:

On February 13, 2004, the Entertainment Industry's Time Capsule, buried on this world-

famous corner since 1954, was opened to commemorate another 50 years of Hollywood

history. It was on this block that Cecil B DeMille directed Hollywood's first full length

feature, The Squaw Man, for the Jesse L Lasky Feature Play Company, and the site

became the birthplace of Paramount Pictures. NBC Radio City was based here from

To mark this special occasion, a new Time Capsule was buried, containing memorabilia

reflecting the entire 1st century of Hollywood. In a ceremony co-hosted by Honorary

Chamber of Commerce, Washington Mutual was entrusted to house this capsule site,

slated to be unearthed in 2037 during Hollywood's 150th Anniversary Celebration.

Close Up of the Hollywood Time Capsule Plaque

Here is a closeup of what the Hollywood Plaque looks like today.

Look for it next time you are near the world famous intersection called Hollywood & Vine in Hollywood, California!
We'll all meet again in 2037 to see it opened up, and place it again for another 50 years.
Previous Post
Next Post