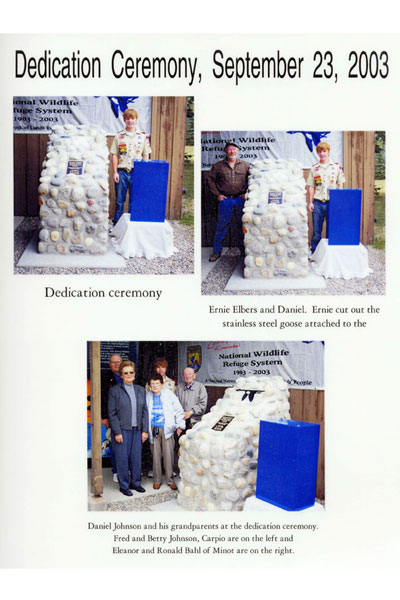 At Upper Souris National Wildlife Refuge in North Dakota, Daniel Johnson spearheaded the NWRS Time Capsule project. He prepared a place to house the NWRS Time Capsule and its enclosure. He made the protective enclosure that housed the FPP time capsule. It was an important part of the dedication ceremony on 23 September 2003.

That year, all of the USFW National Wildlife Refuges nationwide were celebrating centennials. The NWR history throughout those 100 years made for some interesting projects. We at Future Packaging & Preservation are proud to have been a primary part of those celebrations.

This time capsule measured 16x12x28?. It's similar to the 14x14x30 time capsule container we offer today. We engraved it and painted it for them.

The enclosure was large enough to accommodate insulation in between the outside of the time capsule and the inside of the enclosure, plus the rocks give it an added amount of protection. When you place a time capsule such as this NWRS Time Capsule above ground, you need to do everything you can to keep the time capsule at a stable temperature over time. You don’t want to bake the capsule during the day and have it cool at night. The contents inside the time capsule will be affected adversely if you do that.